I’ve been re-listening to The Magic Numbers debut album and it’s far better than I remember it being. It’s an album that I once owned on CD when I was working at EMI, but one that I must have lost – I expect it must have been a casualty of my divorce because it’s nowhere to be seen now.

And it makes me wonder – just how much money does the music industry make out of our failed relationships?

Consider a typical couple together for four years who each buy let’s say six albums per year. So, throughout the course of their relationship, they buy roughly fifty albums between them. Then let’s assume that the unfortunate pair are torn apart, and the inevitable process of distributing the albums between them begins. The thing is, there are going to be a bunch of those albums that they both want to keep (setting aside the angst-ridden memories that they will churn up every time they listen to them), meaning that the break up will be responsible for a little spurt of album sales – let’s say fifteen albums per break-up over the course of the months following each split? Seems a fair assumption to me.

Anyway, as it turns out there were over 150,000 divorces in the UK in 2012, and adding to that the breakups of those poor souls who didn’t make it to the alter (or to the registrars desk), let’s say there are roughly 300,000 breakups each year? So that would account for a whopping four and a half million album sales a year in the UK from break-ups alone.

And all this makes me think that if I were still at EMI, I’d be hot-footing it to the boardroom and trying to convince them to get the A&R guys to start making more records that drive people to infidelity, insecurity, insincerity, incontinence, impotence and as many other relationship killers they can think of that will drive up music sales to new record levels. My god – it could really work. Although thinking about it now, isn’t this exactly what they’ve been doing for years? Maybe they’re more devious than we thought, the machiavellian bastards…

P.S. I’ve just been discussing this with my friend who keeps his 1000 albums separate from his wife’s CD collection for this very reason, just in case (he clearly has great confidence in the future of his marriage).

And on that note, let’s turn to tarts… 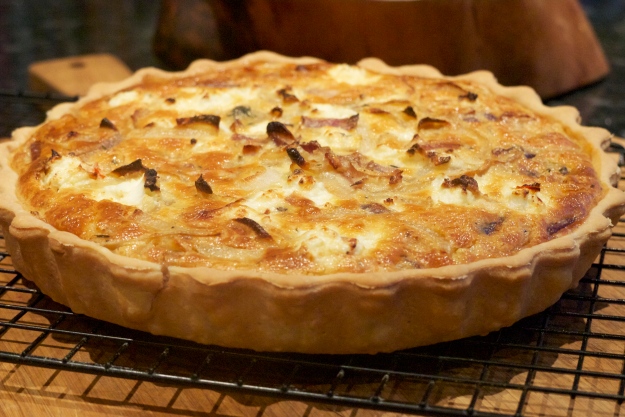 Start by making a rich shortcrust pastry (using 200g plain flour, 100g butter, an egg, a pinch of salt and a little water and lemon juice) and pop it in the fridge for 30 mins to harden a little. Then roll it out and place into a deep, buttered tart dish ensuring you push the pastry gently down into the edges to minimise shrinking. Then trim the top (by simply rolling a rolling pin over the top of the dish to get a perfect cut) and pop it back into the fridge and heat the oven to 160c.

Now start making the filling – chop about five good sized onions (a mix of red and white if you like) and fry them gently in a pan with a few sprigs of thyme, butter, oil, salt and pepper. It will take about 20 mins until they are all soft and some have gently caramelised. Take them off the heat and put the pastry base into the oven covered in baking parchment and baking beans for about 15 minutes to blind bake.

While the tart base is baking, take a large bowl and whisk 5 medium eggs along with about 200ml of double cream, then season a little and add the onions with the thyme removed. Take a little pack of mild goats cheese and break blobs of it into the mixture leaving some behind for the top.

Take the base out of the oven and pour in your mixture and then top with more of the goats cheese. Put it all back in the oven at about 175c and let it cook for 30-40 mins. When it’s ready it will have risen above the tin and it will be beautifully golden brown.

Take it out and let it cool for about 20 mins and serve with a green salad and a crisp white wine. And make sure it doesn’t all get eaten straight away – it’s even better a day old (I just had a slice for breakkie – perfect)